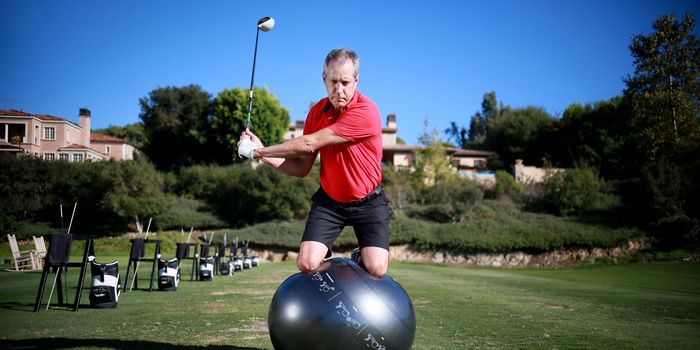 One look up close at tennis great Jimmy Connors practicing in the early 1980s gave Dane Chapin a life-changing realization: He would never reach his dream of playing the sport professionally.

Mr. Chapin, then a junior on UCLA’s tennis team, watched Mr. Connors, a UCLA alum, at practice one day. He knew he’d never come close to matching his talent, no matter how hard he worked. “While competitive tennis was not in my future, my desire to participate in competitive sports never left me,” he says.

After putting in endless hours of his life on tennis courts, Mr. Chapin traded his favorite sport for a real-estate career. But while networking on the golf course on the way to becoming chairman of Zephyr Partners, a real-estate development company in Encinitas, Calif., he rediscovered the competitive edge of his youth on the links. At 59, he is winning amateur tournaments.

“Golf gives you a magical place to develop personal and business relationships,” he says. “Many of my investors are golf buddies.”

In 2001 he joined a golf club, signed up for private lessons and began entering tournaments around Southern California.

The sport quickly went from hobby to obsession, he says. “I loved how the game blends athleticism and intellect,” he says. “And, like tennis, the primary competitor in golf is myself, which parallels life. I know I’ll do well if I do the hard work.” The scratch golfer—someone who can play to a course handicap of zero—plays six to seven amateur tournaments a year.

Mr. Chapin says he’s always been a fitness fanatic. But a year ago he intensified his gym routine by adding a stability ball to the mix. “I adapt everything you would normally do on the floor to the ball,” he says. He credits the new workout with improving his balance and coordination and says that translates on the course.

“My golf swing has never been stronger and more consistent,” says Mr. Chapin, who won his club championship this year at the Bridges at Rancho Santa Fe, a San Diego-area course.

Mr. Chapin hits the gym near his home in Carlsbad, Calif., at 6 a.m., six days a week. He stopped running in his 40s due to overuse injuries. For cardio, he rides the stationary bike for 45 minutes or walks on the treadmill at 4 miles an hour with a 15% incline. Every other day he does a 40-minute strength routine using a stability ball. Kneeling on top of the ball requires serious core engagement to stay balanced. “If you cheat, you fall off,” he says.

While on the ball, he might do overhead presses or oblique twists with a weighted pipe. He’ll toss a 16-pound medicine ball back and forth with a trainer, alternating between chest passes and one-hand overhead throws while balancing atop the ball. The most challenging stability exercise in his routine involves performing push-ups while balancing his feet on one ball and his hands on another. “People walk past me and just shake their heads,” he says.

He golfs three to four days a week, averaging four hours a round. In the summer he tries to sneak in a two-hour, 18-hole speed round at 7:30 a.m. so he can get to the office by 10 a.m. He spends 80% of his practice time working on shots inside 100 to 125 yards with a combination of pitches, chips, sand shots and putting. He jokes that when his daughter was younger he used “every bribe in the book” to get her to golf with him. Now 26, she has a standing monthly date with him at the golf range.

Mr. Chapin has a smoothie at gym and a latte on the way to the office. Lunch is a turkey sandwich or a Greek salad with chicken. He says ever since he and his wife, Katherine Chapin, built an outdoor kitchen, they’ve gone from eating out five nights a week to dining in. “We grill steak, chicken or fish and vegetables and always make a salad,” he says. Watermelon is his favorite food. Once a week he splurges on Häagen-Dazs chocolate ice cream.

The Gear and Cost

Mr. Chapin spent around $2,000 on his TaylorMade clubs and Scotty Cameron Select Mallet putter. He wears FootJoy Freestyle golf shoes ($160). He always wears a wide brim hat and sunglasses and lathers himself in sunscreen. “My buddies call me Gilligan, but I’d rather deal with ridicule than get sunburn,” he says. He pays $160 a month for his Equinox gym membership. 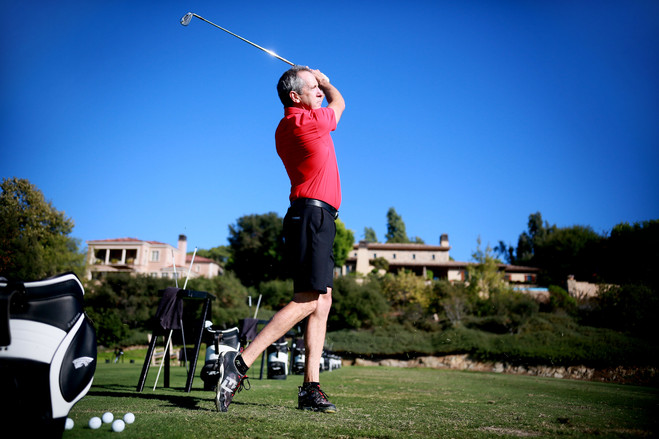 Mr. Chapin won his club championship this year at the Bridges at Rancho Santa Fe.


A Balancing Act for Your Golf Game

The best golfers have one thing in common: great balance. So says Randy Myers, director of golf fitness at Sea Island Resort in Sea Island, Ga. Mr. Myers, who works with over a dozen PGA Tour players, says adding a stability ball to your workout not only improves balance but can also help with hip mobility, which is key to a great golf swing.

“Being able to turn your hips in a symmetrical, balanced way can be very challenging for people who sit all day,” he says. Acrobatics on the ball aren’t necessary. “You can train yourself to jump on top of a ball, but that doesn’t make you a good golfer,” he says. “It’s also not safe.”

Mr. Myers suggests the following exercises to work hip mobility: Place a stability ball between your back and a wall and stand as if you are about to perform a squat. While keeping your lower body stable, extend and rotate your arms into a backswing position as far as you can to the right, then to the left, and repeat.

Sit on the ball, grip a light dumbbell or weighted plate and extend your arms straight out in front of you. Turn just your upper body side to side to isolate the core, keeping your hips squared. For an added challenge, hover one foot off the ground or extend it straight while keeping the hips squared. “It sounds counterintuitive, but creating stability in the hips creates mobility, and that allows you to generate speed,” he says.

What’s your workout? Tell us at workout@wsj.com

More From What’s Your Workout