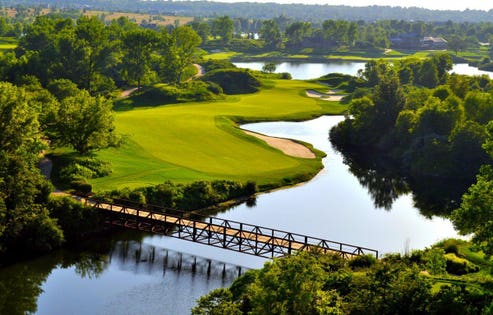 A unique private club model is quietly continuing to expand and invest in high-end golf properties around the country. The end goal of the Dormie Network is to assemble a stable of as many as a dozen destination clubs focused purely on golf and targeted at the game’s traditionalists.

Victoria National is also the most highly-regarded of the well-heeled group, ranked 43rd in Golf Digest’s list of the Top 100 U.S. courses. A Tom Fazio design that opened in 1998, the course was built on more than 400 acres of reclaimed mining land just outside Evansville. The esteemed layout was voted the best new private course in the U.S. in 1999 and, with over 80 acres of lakes created long ago when miners hit the water table in various spots, there are water hazards on 16 holes.

During a time where some private clubs are struggling to compete for members due to oversupply in crowded markets, the Dormie Club is taking a novel approach. It’s not only expanding its lineup, but investing significantly in course maintenance and agronomic improvements, club accommodations and other on-site lodging, the installation of on-course comfort stations, clubhouse renovations, and new maintenance and practice facilities.

Capital improvement projects are currently underway or in the planning stages at every club in the network. Dormie Network is adding cottages at Victoria National that will double the club’s current accommodations capacity.

“It’s not just about growing Dormie Network, it’s about reinvesting in course conditions and amenities in ways that add value to the pure golf experience for our members and their guests,” says Dormie Club founder Zach Peed, a former college golfer at Nebraska Wesleyan whose family has several substantial business interests in the Nebraska area including processing beef and chicken, and publishing.

Ultimately, the experiential focus of the Dormie Network is on the golf itself. It’s serving an affluent customer base of purist golfers who like to travel.

Whether for business or leisure, the properties in the portfolio are expected to offer an intimate golf experience in a relaxing, accommodating and pristine environment through premium accommodations and amenities. The clubs are close to cities like Atlanta, Charlotte, Indianapolis, Louisville, Nashville, Omaha, Raleigh, Richmond, Roanoke, St. Louis and San Antonio, making them ideal destinations for weekend getaways, buddies’ trips or corporate retreats.

There is local membership at each Dormie Network club, but those are capped at 100 per property. The main focus is on adding national members across the entire network. During this period of substantial growth and expansion, Dormie Network is offering early adopters dramatically reduced initiation fees and dues structures. It’s an intriguing model in the golf world and it will be interesting to see if others follow the Dormie Network’s lead.

The Top 5 Reasons to Play Golf on Kauai

A Rising Star in Golf: Kauai’s Ocean Course at Hokuala