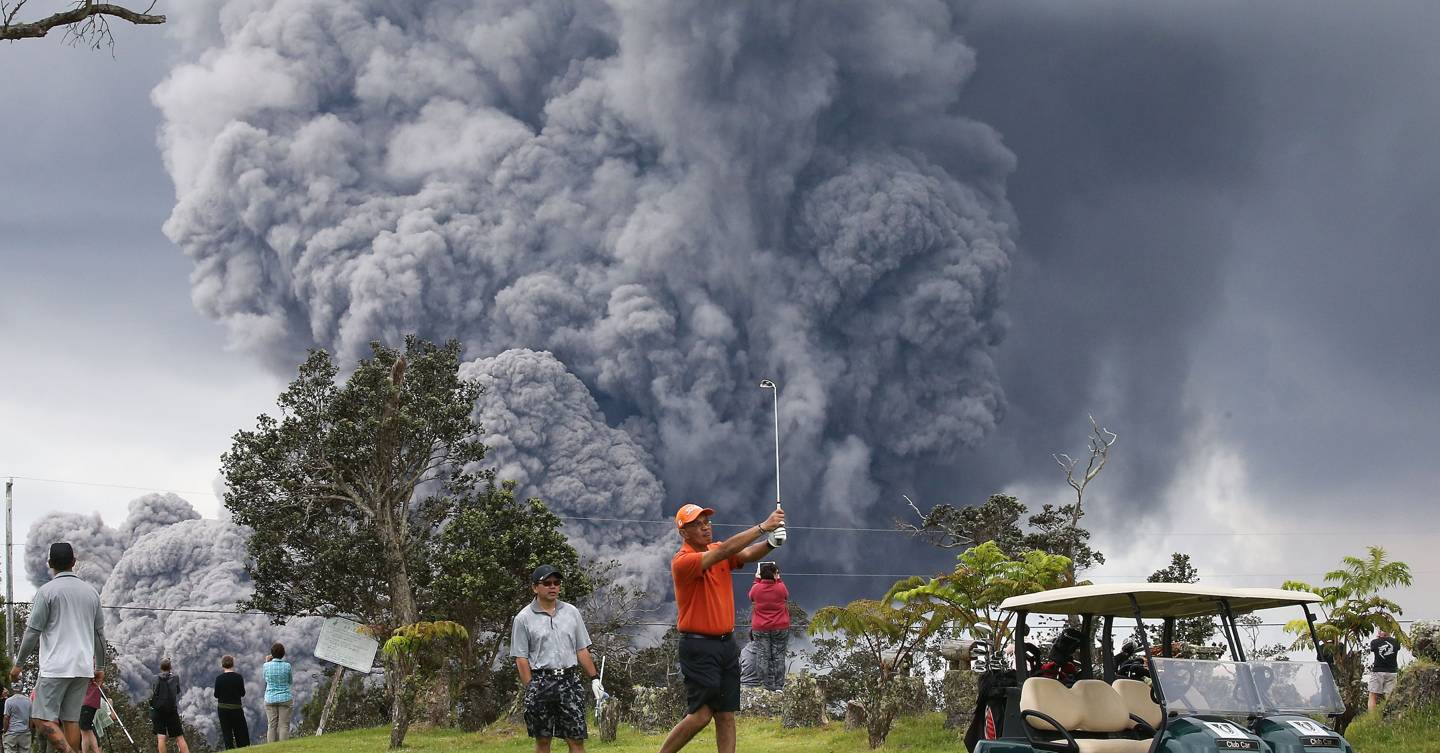 Kilauea’s fury stormed ahead full pace this week, but some Hawaiians are still managing to go about their business and get a putt in along the way. On Thursday, an eruption at mount Kilauea’s summit sent an ash plume 30,000 feet into the air, and officials warn that ongoing ash emissions and further eruptions may unleash a coating of ashfall over Hawaii’s Big Island. 18,000 ash masks have been handed out on the island.

The Halemaumau Crater erupted at 04.15AM on Thursday, May 17, with a short but powerful burst. Rain at the time fortunately meant the ash travelled less far than anticipated. Residents have complained of itchy eyes and irritated skin. The day before, about 125 shallow tremors shook Kilauea’s summit, damaging roads and buildings. The strongest quake was a magnitude of 4.4 on the Richter scale, and dozens more have been upwards of magnitude three. These recent explosions, officials say, have been driven by steam, as water beneath the ground is heated by magma, lava and hot rocks.

But as the volcano erupted people at the Volcano Golf and Country Club continued to keep playing their rounds. “The sulfur dioxide gas is the greatest danger,” a spokesperson for the golf course said. “The are no masks available to protect from the toxic gases.”

Rocks of up to two feet in width were hurled from the crater on May 16, and officials are warning that boulders the size of cows – 10 feet across – could come raining down from the sky above the crater, and have urged those within a half mile radius of the crater to be wary. The United States Geological Survey has issued a red alert, suggesting a major eruption is imminent and ash is likely affect air traffic.

But on Thursday, a new fissure opened up in the Leilani Estates district nearby the crater, with others reactivating to emit noxious sulphur dioxide and ooze malevolent lava. Sulphur dioxide is usually only emitted at the volcano’s crater, but has been found stemming from the numerous fissures that have emerged in the ground. People suffering from conditions like asthma and emphysema, have been urged to stay indoors as extended exposure to sulphur dioxide can exacerbate breathing problems.