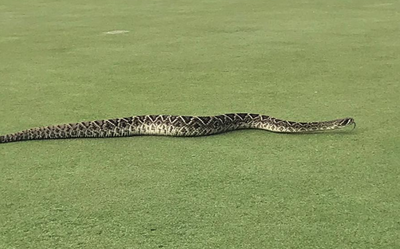 By now, you are probably saying to yourself, “Not another snake article again”. Granted, we’ve spoken about a good few snakes found in weird places over the past year. Not to mention the weird two-headed which we spoke about earlier in September.

There’s just something about a snake that most of us find fascinating. We’re not sure if its the different types that exist, or whether most of us consider them to be dangerous creatures.

This time we’ve found a video showing a massive snake attempting to interrupt a game of golf on a golf course.

Read: One of the most beautiful snakes we’ve ever seen in Durban

The footage was uploaded to Instagram and shows the slithery serpent making its way through the course.

According to Instagram user Logan Ungerer, the video was shot on the Mangrove Bay Golf Course in Florida.

“If I saw this on a course I would head for the club course. I wouldn’t be able to swing a club for the rest of the day. I’d never play on that course again!

So yes, it is another snake video, but this one is like no other. Go on, you know you want to watch it…