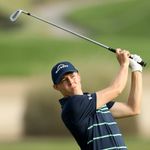 Matt Fitzpatrick birdied his final four holes to grab a one-shot lead after the opening round of the Omega Dubai Desert Classic.

Fitzpatrick’s fast finish saw him close out a seven-under 65 at Emirates Golf Club and move ahead on a congested leaderboard, where eight players lie a shot off the pace.

Sergio Garcia and Bryson DeChambeau are part of the share of second on six under, with defending champion Haotong Li in the group a further stroke back alongside Lee Westwood and Ian Poulter.

“It was obviously a great finish to the round,” Fitzpatrick told Sky Sports. “A couple things that I’ve been doing in the off-season look to have paid off a little bit.”

Fitzpatrick reached the turn in 34 and started his back nine with a birdie at the par-five 10th, with a close-range gain at the 13th lifting him within three of the lead.

The Englishman holed a 20-footer at the 15th and added another from a similar distance at the par-four next, before following a tap-in at the 17th with a two-putt gain at the par-five last to close out his best opening round since 2015.

DeChambeau and Garcia both made bogey-free starts to the week playing in the same group, while Thongchai Jaidee held a two-shot lead until a final-hole double-bogey dropped him back to six under.

Callum Shinkwin posted a final-hole birdie to get within one of the lead, with Scott Hend, Kalle Samooja and French duo Romain Langasque and Matthieu Pavon also sitting tied-second.

Li began his title defence by mixing seven birdies with two bogeys, as Tommy Fleetwood reached the turn in six under but carded two bogeys on his back nine to drop two strokes back.

Watch the Omega Dubai Desert Classic throughout the week live on Sky Sports. Live coverage continues on Friday from 7.30am on Sky Sports Golf and Sky Sports Main Event.