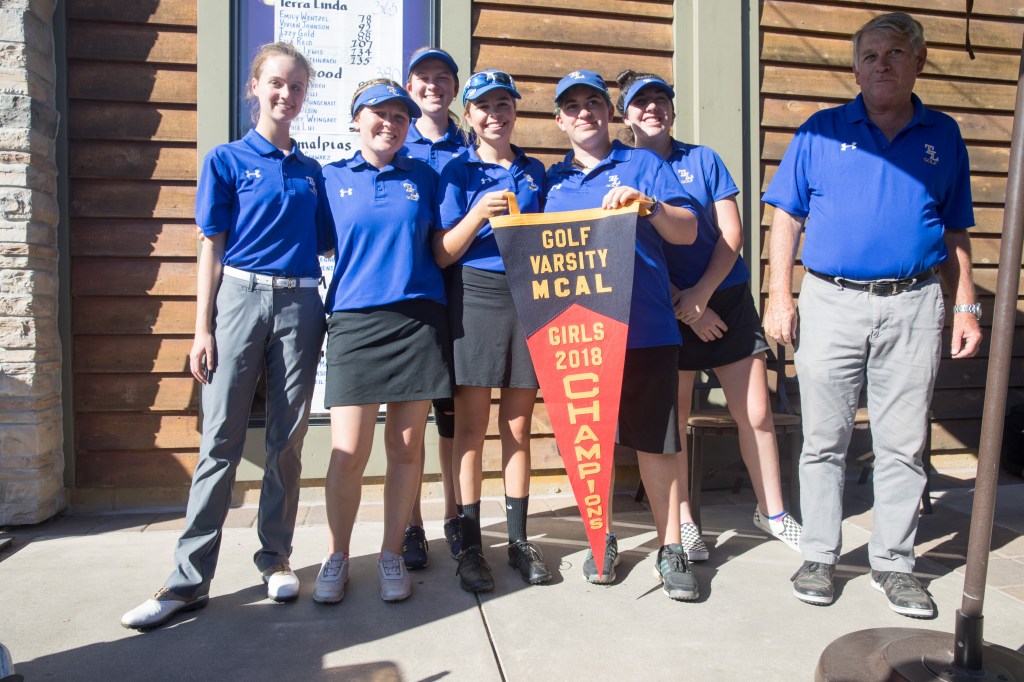 After the first quartet of girls golfers completed their 18 holes at Peacock Gap Golf Club for the MCAL girls golf championships on Monday, parents, coaches and club members stopped and gawked at the scores that graced the big board. The most notable score was that of Novato High’s Kiana Briggs, a freshman who won medalist honors with 4-under 67 at the par-71 course.

“In the seven years I have been doing this, that was by far the best round,” meet director and Terra Linda athletic director Steve Farbstein said during the banner presentation. “And we have a few more years of this to come.”

Novato coach Rick Russell knew that Briggs would shoot under par and insisted that she could do better.

“She’s had under-par or par all year. My hope was to not go too low, (because) she’s got North Coast and State — save the best for last,” Russell said, explaining, “It’s hard to beat your very best.”

Briggs — who bogeyed a single hole Monday — put up the best score she has had in 18 holes, but said she missed numerous putts.

“In the front nine I was lipping out like every single putt, so on the back nine I tried to clean that up a little bit,” Briggs said.

Her clean-up attempt worked, adding to her one birdie in the front nine with four on the back nine, including three in a row on holes 13-15.

“It feels really good,” said Briggs, who is already looking ahead. “My goal is try to play college golf for a D-I school.”

While college is still a few years away for the freshman, there’s precedent for Briggs, with her brothers Robert and Matthew both playing collegiately for Cal. In the meantime, she’s got another goal she can focus on.

“My goal is to be Player of the Year all four years,” Briggs said.

The MCAL girls golf landscape has been in a bit of a renaissance since before Briggs arrived, with a freshman-laden Terra Linda team going undefeated and claiming the postseason title in 2017 before replicating both feats in 2018. The sophomore-laden Trojans finished Monday’s championship with a score of 365 to claim the 2018 banner.

“Last year was so emotional because of all the losing in the past, never coming close,” Troya said. “This year we were kind of in the role of favorite. This year it was kind of more relief than joy.

“I knew (Briggs) was coming, so I told my two girls at the top last year that they better focus on winning Player of the Year (in 2017) because there’s someone coming who’s probably going to be Player of the Year the next four years; that’s who I was talking about.”

Led by last year’s Player of the Year, Emily Wentzel, the Trojans were left in less suspense about claiming the pennant this year. Wentzel, a sophomore, posted a 78 — the second best score on the day and only player outside of Briggs to get under 80. Troya said Wentzel broke 80 for the first time and 40 on nine holes for the first time.

Junior Izzy Gold shot an 88, sophomore Vivian Johnson a 92 and sophomore Ella Reid rounded out the Trojans’ scorers with a 107.

“It’s surreal. Last year it was crazy that we could pull that off. This year, doing it again is just amazing,” Wentzel said. “Coach said it was the first time in 40 years a (public school) team has gone undefeated in back-to-back years.”

Troya was reluctant to declare victory until all the golfers finished, but kept close track of where his team and their top competition — Redwood (380) and Tam (386) — stood as the scores came in.

Troya also noted development of Reid’s game, pointing out a major drop between last year and this year in score.

“She was 28 shots better than last year. This course is a little easier, but not 28 shots easier,” Troya said. “That’s just improvement; her golf IQ is getting better all the time.”

While the Trojans are now racking up MCAL title banners, the significance of them is not lost on the team.

“It’s so awesome to know that it wasn’t just one season. If I walk into the gym, it’s great to see that I did something that’s going to be a legacy,” Gold said. “We have a banner from 1969… so to know it’s going to be there for a while feels amazing.”

With the Trojans set with a strong core for a few more years and Briggs just at the beginning of her career — which Russell hopes includes winning this year’s NorCal title and placing at state — there’s a lot of good girls golf in Marin.

“Great golf is coming. We started last year and this year again we did very well,” Wentzel said. “It’s just going to get better from here.”