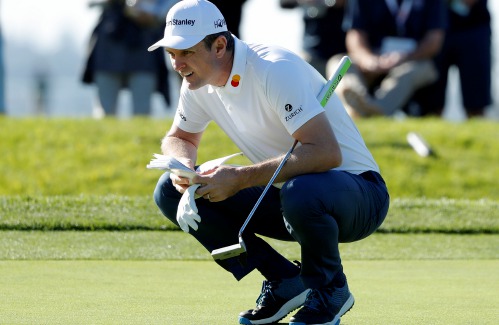 San Diego — Justin Rose had three penalties and still kept a three-shot lead on Saturday with a 3-under 69 at the Farmers Insurance Open.

Rose had six birdies and an eagle on another pristine day along the Pacific Ocean, a big reason why scores have been so low this week on a South course that will host another U.S. Open in two years. When he two-putted from 12 feet for eagle on the par-5 13th, Rose led by six shots.

And then he pulled his shot from a fairway bunker into the hazard for a double bogey, his second of the round. And torn between laying up with an 8-iron or going for the green on the par-5 18th, Rose hit a 3-wood heavy from the first cut and went into the water, closing with a bogey.

That dropped his lead to three shots over Adam Scott, who birdied his last hole for a 65.

“There was a long way to go,” Rose said. “So I wasn’t really playing with the lead in mind at that point. If I was running 30th in the tournament, that was a shot I would probably hit. But yeah, it didn’t work out.”

Jon Rahm had a 68 and was four shots behind, followed by 22-year-old Doug Ghim, the former No. 1 amateur playing this week on a sponsor’s exemption. Ghim shot a 67.

Tiger Woods had the biggest gallery and didn’t make much noise. Woods birdied three of his last five holes to salvage a 71, leaving him 13 shots behind and in search of moral victories in his 2019 debut. He was at 5-under 211.

Scott was the only player to give Rose a serious run, and it didn’t feel like much.

Starting the day seven shots behind, Scott opened with an 8-foot birdie and then holed out from 103 yards for eagle on the next hole. He added four birdies in a five-hole stretch at the turn and delivered the low round of the tournament on the South course.

Rose made plenty of errors, though he atoned for them with plenty of exquisite shots.

After starting with two birdies through three holes, Rose pulled his shot from a fairway bunker on the fourth hole into the hazard well left of the green, and he missed a 10-foot putt to make double bogey. He answered with two birdies and an eagle on the par 5s, reaching all of them in two, and appeared to be sailing until the missed shot out of the bunker on No. 14 for his second double bogey, and his shot into the water on the final hole.

DeChambeau Ahead at Dubai

Dubai, United Arab Emirates — American golfer Bryson DeChambeau will take a one-stroke lead into the final round of the Dubai Desert Classic after shooting a 4-under 68 on Saturday.

Li Haotong, who is looking to claim back-to-back victories at the Emirates Golf Club, is the nearest challenger to DeChambeau after moving into second place outright with a third straight 67 of the week.

DeChambeau, who is the highest-ranked player in the field at No. 5, is seeking his first victory overseas.