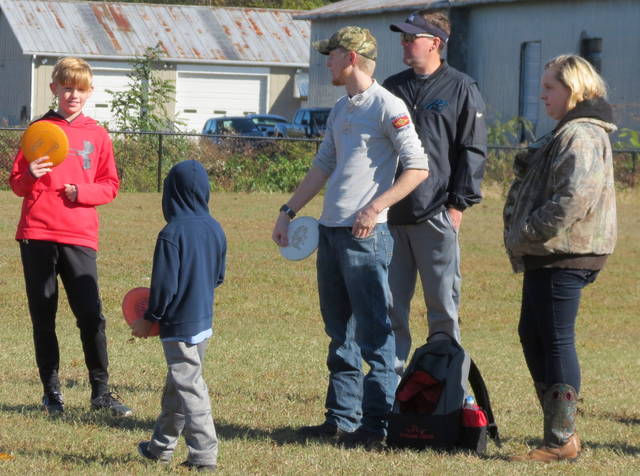 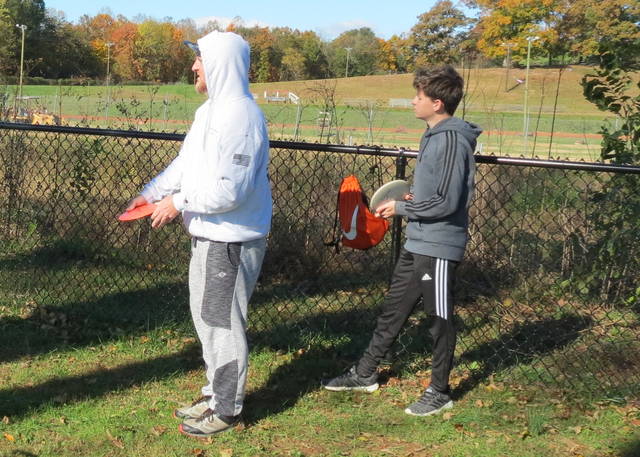 Jeff Ratliff, left, of Asheboro and Daniel Troutman of King prepare to tee off during Saturday’s tournament at Mount Airy High School. – 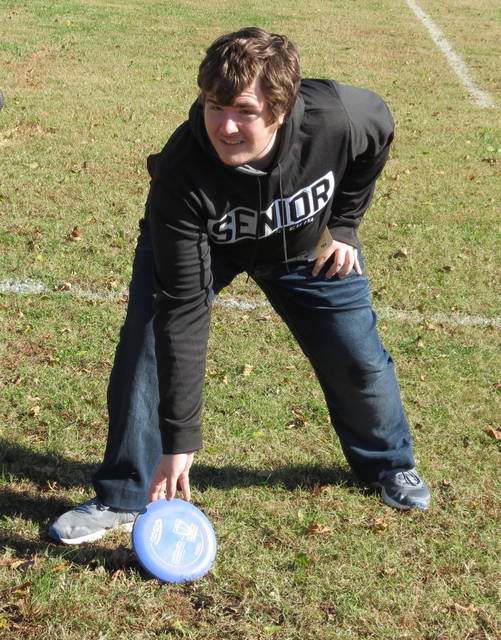 Morgan Pogue, a Mount Airy High senior, retrieves his disc in anticipation of another throw. – 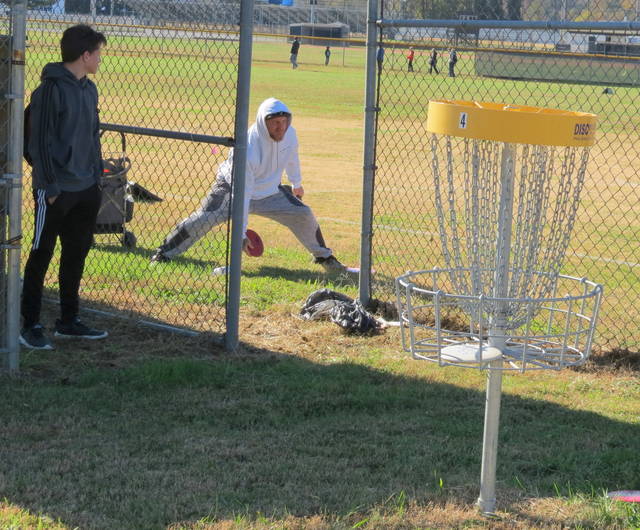 Jeff Ratliff has to negotiate a fence to reach the basket after his previous shot went awry, as Daniel Troutman watches. –

A group of players prepares to hit the course. – –

It’s a chilly Saturday morning, but the grounds of Mount Airy High School are still a hub for sports activity.

A big tennis event is under way on the campus courts, occupied by shorts-wearing youths battling a brisk northwest wind playing havoc with serves and back-hand shots. The nearby football field is awaiting a showdown later in the day between the home team and East Surry.

There is yet another activity going on among the cluster of athletic fields — one in which groups of people appear to be tossing Frisbees, or the official name “discs,” toward basket-like structures located at strategic points on the grounds.

Their targets are small rounded structures with lines of chains hanging down from the top and catch trays at the bottom, which are mounted on poles.

As respective groups of players complete a series of throws to reach each basket, one in the bunch writes down the number of tosses needed to do that on a scorecard.

No, this wasn’t golf and nor could it be compared to the carefree lobbing of Frisbees in the park on a pleasant fall day.

What it was, was a disc golf tournament being held at a nine-hole course developed at Mount Airy High about a year ago, a competitive event pitting players of all ages and skill levels — some even described as “professionals.”

Those hard-core players were distinguishable by the bags they carried, similar to ones of golfers which are filled with clubs. But the bags seen Saturday contained different types of durable plastic discs, albeit for the same purpose — such a “driver” for the first long throw, a midrange disc when closer to the basket and a “putter” to complete holes on the course.

Then there also were the obvious novices with maybe just one disc in hand, trying to make tosses as best they could on a breezy day.

All were there for the same purpose: to raise money for a school in eastern North Carolina where students are trying to recover from the devastation left from Hurricane Florence in September.

The players seemed motivated to come and help by participating in the tournament, despite the conditions.

“It is a bit chilly, but the turnout has been great,” said Shay Rosales, a senior at the high school who spearheaded the event with some of her classmates. She also was one of those trying to negotiate the disc golf course filled with flurries of activity.

During a break in play, Rosales estimated that about 40 players were involved, a figure she was pleased by — “especially since it was so cold this morning.”

“I’m trying to help my school, and it’s a good cause,” said Daniel Troutman, a student of Mount Airy High who lives in King and was taking part to aid youthful counterparts of Havelock Middle School suffering from Florence’s effects.

The tournament would end up raising $675, coupled with proceeds from popcorn sales by Rosales and others during a Community Night event earlier in the week, according to Polly Long, Mount Airy City Schools’ Workforce Initiatives coordinator.

Long assists students with various projects, including the disc golf tourney held on the course she played a key role in developing.

“And the thing I am most proud of,” she said of Saturday’s event, “it was organized by kids here at the high school.”

All the charitable, warm-and-fuzzy feelings aside, the disc golf tournament was a serious affair for competitors including Jeff Ratliff of Asheboro, who came all the way to Mount Airy to ply his skills.

“I’ve been playing about seven or eight years now,” Ratliff said. In addition to benefiting the hurricane victims, a main goal of Saturday’s event was providing more exposure to the growing sport of disc golf in this area.

“It’s a good way to get exercise,” Ratliff explained.

When following groups of players around the course, it becomes evident that disc golf is not that much different from regular golf.

There are obstacles and water hazards to deal with in both sports. And just as golf balls get lost in weeds, folks were spotted Saturday trying to find discs in bushes as the result of errant throws.

One group of players must wait until another ahead of them completes a hole before teeing off, and after that the players take turns tossing discs based on which one is farthest back from the hole.

Another comparison with regular golf is that disc golf players also must take weather conditions into account, such as the 10 mph winds whisking around the high school Saturday.

“It poses quite a bit of challenges,” Ratliff agreed.

“You have to play the wind factor,” he said of a need to overcompensate or undercompensate in the way the disc would be thrown otherwise.

Ratliff mentioned that temperatures on the hot or cool side also can have an effect on the equipment. “It sometimes changes the disc itself.”

However, one glaring difference between regular golf and disc golf is that the latter seems to leave players with a good feeling no matter what happens on the course.

“It’s like Zen to me,” Ratliff confided, “a way to clear your mind.”

Jeff Ratliff, left, of Asheboro and Daniel Troutman of King prepare to tee off during Saturday’s tournament at Mount Airy High School.

Morgan Pogue, a Mount Airy High senior, retrieves his disc in anticipation of another throw.

Jeff Ratliff has to negotiate a fence to reach the basket after his previous shot went awry, as Daniel Troutman watches.

A group of players prepares to hit the course.